Happy new year guys. Well, it's been almost a year I own this Integra DC5 Type-R. What can I say after 365 days of ownership of this coupe? To be honest I have been enjoying every minute driving Black Mamba without any major issues and heartbreaking problems. The car is still as tough as a nail since the first day it came out from the showroom.
Thoroughout the year I've made lots of new friends and learn new things in regards to the car. The Type-R fraternity in Malaysia is getting bigger, with more DC5s and FD2Rs being the weapon of choice. I see more DC5s in the East Coast now as compared to last couple of months. Few people that I know has sold off their EG, EK, Proton and moved on to the next level with the Type-R. It's good to see these guys talking in forums, attending meet ups for pro-active discussions and joining the track days. Competition among others are inevitable but everything are in the most healthy way, which I feel very comfortable with. No more kiddie stuffs like being emotional / depressed when losing in a race or trying to be the "king" in every aspects of modifications, etc etc etc (I don't have to elaborate further on this). Maturity has taken it's place in the community.
Whilst I was having fun with Black Mamba, I have also identified the normality of wear and tear of this car such as the faulty O2, Map, TP sensors and mechanical things such as the weak hydro mount and confusing handling setup. I'm considerably ready should any of these happen to me. So what have I achieved in 2009? 208whp with 20kg/m of torque with 2:51 timed run in Sepang (Night run, with a passanger) made me a happy man. The black RPF1 made Black Mamba looks gangster together with few other aesthetic mods. That's about it I guess. Not much has been done but surely more will come in 2010. Few things that was supposed to be done in 2009 been pending for couple of months due to time and funding limitations. With perserverance and God's willing, I hope to complete the major projects as below: 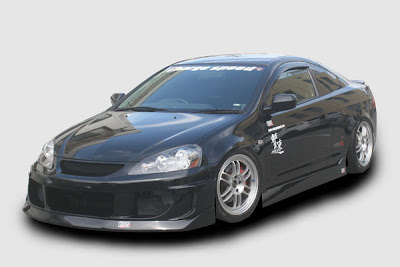 As you know, few months back I have purchased a set of DC5 Chargespeed Kouki bodykit as above photo (full photos here - http://www.chargespeed.com/english/dc5-kouki-b-1-e1.htm) it has been lying around in the paintshop for sometime. I need to raise the entrance to my house porch before I could put it on or otherwise the height will definitely destroy the entire front bumper. Better be safe than sorry right? The demo car above looks wicked with an 18 inch RPF1 but I'll just stick to 17s for now.. 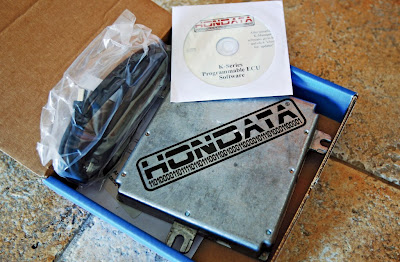 I've sold off my Greddy E-manage Ultimate and V-manage recently to fund for Black Mamba's new brain - the famous Hondata K-pro. With this baby installed soon, I have the strongest foundation to fine tune the engine with whatever mods being done. Can't wait for this! Although currently my car is only pumping 200whp and 19.5kg/m torque after removal of the Greddy's piggybacks, I felt the pulling power is much more stronger when the VTEC kicks in (5800rpm). Kinda strange but I kinda like it..It's just that I can't go beyond 180km/h for now. :( 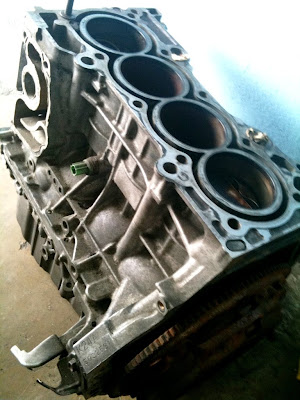 Last but not least, I have purchased the Holy Grail of the iVTEC - The K24 block from Honda Odyssey RB. Hehe. The plan for this hybrid K20/K24 'frankenmotor' so far would be; 87mm forged pistons, forged conrod, and forged crankshaft. If money is not an issue (its definitely going to be an issue as I'm getting married end of 2010!) I will also get other necessary parts to complement the build such as the RBC/RRC intake, bigger throttle body, clutch set, aftermarket camshafts and so on. Nothing fancy about this build as I'm not horsepower crazy. I'm actually looking forward to navigate Turn 9 in SIC on 3rd gear with the mighty 2,400cc N/A torque. Heheh. I'll write about this build once it has started.