Sold off my Pivot Racing Monitor few weeks ago and got myself this cool multi-functional display monitor by Blitz Japan. Initially I wanted to get the Ecliptech i-Shift Progressive Shift Light for Mamba but since this item will be put on top of the steering column, I don't think I could see it as I'm planted deep in the full bucket seat. Haha. So until I get an aftermarket steering wheel (to have a clearer view of the steering column) this R-VIT will serve as my real-time data display.

Why R-VIT and not APEXi RSM? Well, as you can see from the link above, it has a lot of features that could assist my driving. Though you need to buy few sensors to make some display work (oil pressure etc), the other information does help me to properly monitor what my car is doing. One of the best feature of the R-VIT is the fuel consumption monitoring. Not very sure how accurate this is since my O2 sensor is out but the km/l figures decrease whenever I drive WOT haha. There's nothing wrong with RSM, it's just that the design and display looks old-fashioned to me. :)

By the way this is the latest version of the R-VIT and you just need to plug in the single socket to the OBDII port to activate it. If there's anyone interested to buy this do let me know. I don't mind selling it cheaper than what I got for. My email is on my blog profile. 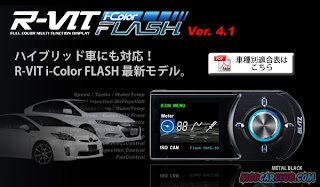 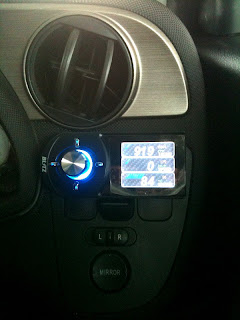 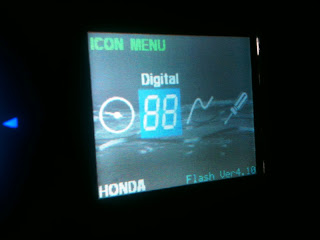 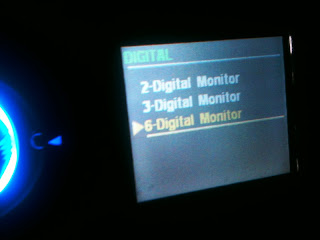 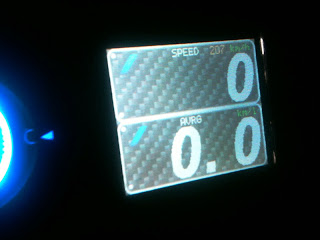 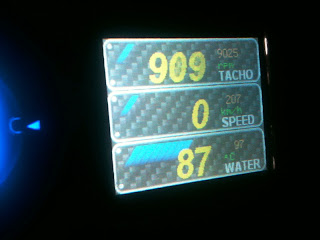 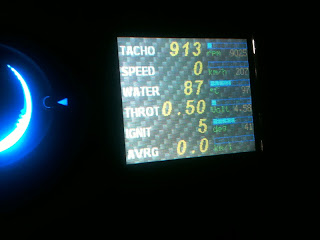 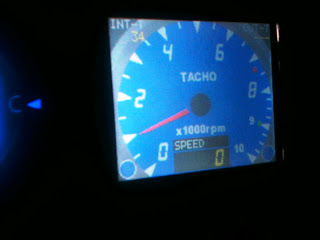 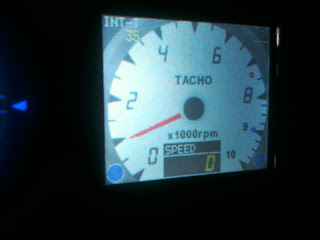 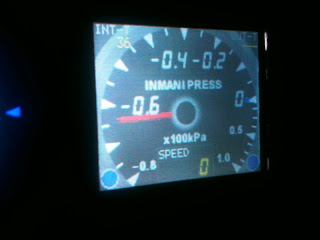 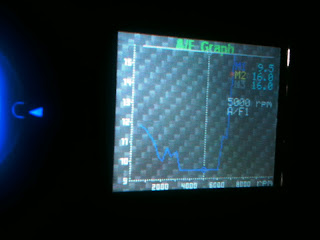 If you have been following my blog you will remember I have posted about the Chargespeed Japan bodykit which I purchased in Singapore. The complete 4 pieces kit were collecting dust for almost two years simply because I was not ready to get it installed on my car.

Throughout 2010 and 2011 I have seen only two cars that were using this rare bodykit. One of them is an on-the-road car with only front bumper and the other one is a complete kit on a car that has been on the dealer since god knows when. I have managed to save some photos below and that is how it will look on my car, except mine is lower and has nicer wheels :P . 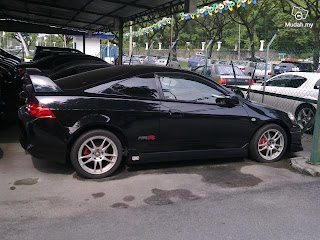 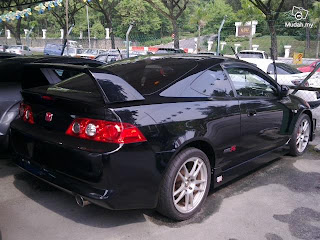 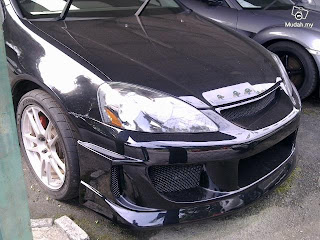 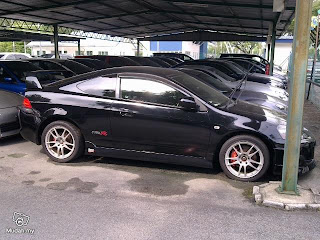 Personally I think one of the reason why I did not want it to be replacing my stock OEM bodykit is that the 'curves' of the bodykit are not totally exposed on a black car. It would definitely look more revealing on a brighter colored cars I believe. I have tried to sell it for couple of times but the offers received were not up to what I'm expecting so once again the kit continued it's hibernation at the paint shop.
Time goes by, and to cut the story short, I had the opportunity of a lifetime to own a complete Mugen bodykit for FL DC5 from a friend (This will be written later on a separate post coz it's too exciting haha). Knowing the fact that the Mugen kit can cause a big hole on my bank account, I had to make a bold move to earn some cash to finance this project. No, not robbing the bank of coz. Haha. The Chargespeed kit came into my mind and I started to make it available for sale again. Thankfully after just few days a fellow DC5 friend whom I know from the Facebook group offered to buy the kit. The price has been agreed and I had to drive down to JB and return back to KL to deliver the items to Faizal.

In just less than a week, the bodykit was painted to Championship White and being perfectly fitted on Faizal's K24 DC5R. Ladies and gentlemen, I am proud to present you... the one and only.. daily driven DC5.. with a complete Chargspeed Kouki bodykit.. in Malaysia!! Hahaa! 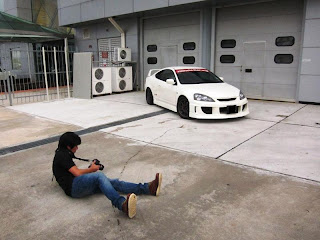 ﻿
That is all for now and I hope you enjoyed looking at the pics. Year end will always be with full of surprises. LOL. I will write soon on the Mugen project for Black Mamba. Last but not least, expect a proper photoshoot of these two cars in the next 3-4 weeks :)
Posted by me or you at 12:07 AM No comments:

Once the header installation was done, I took Black Mamba for a retuning session the following day. Initial plan was to get it retuned by Tung Chun, however due to the limited time for me to travel around, I opted to get it done by Desmond of N1 Racing.

Tuning was done succesfully on a cloudy Saturday afternoon where it was not too hot, not to humid. Obviously the end result below made me smile the whole day but most importantly the a/f ratio were perfectly tuned to suit my daily driven engine. Prior to the tuning, the car was run couple of times on the dyno to get the base reading and surprisingly Desmond mentioned that my a/f ratio was already optimum from the last tuning with Tung Chun. I am sorry for not being able to put on the full graph as I lost the paper, so once I manage to retrieve back the graph I will share wity you.

1. Powerwise the car feels much livelier than before. The header does release extra power from the engine since the excessive gas has been smoothly released compared to the stock header. Low and mid range power has been improved and I enjoy seeing the revs climbing faster than before. VTEC point has been maintained at 5500rpm as I can't afford to have it engaged earlier on a long distance drive. Furthermore I am running on 5.1 final drive so it's not very wise to lower down the VTEC engagement point haha.

2. After the tuning, my secondary O2 sensor decided to die on me. No choice but had to disable it temporarily. Now I need to get a complete primary and secondary O2 sensor as my fuel consumption has increased! If you remember on my post last year, my primary O2 has been disabled when I installed the Hondata.

3. As I have mentioned in earlier post, there is a rattling sound coming out from underneath the car as if metal plates are hitting on each other. Will make a check and possibly fix this next time.

Realizing that my Greddy spark plugs were never changed since 3 years ago, I decided to get a set of new Brisk plugs for the next service. As recommended and claimed by some friends, these Brisk plugs can give few extra horses on the dyno compared to other plugs. Since I am going to get the car dyno-tuned after the header installation, why not try this?

One of the reason why Spoon Sports remains famous among the Honda enthusiasts is because they produce simple yet effective performance products. The subframe rigid collar is a good example of simple engineering that improves a car's overall handling. These rigid collars are used to completely eliminate subframe free play by filling up the gaps where subframe and chassis meet and the bolt inserts. With the chassis and subframe 'united', the chassis stability is greatly improved, suspension travel becomes more precise, tire grips are better during driving and unwanted subframe 'noise' is eliminated.

I had the opportunity to obtain a set from a friend who had sold his car previously but never got the chance to install it. While the car was being installed with the header, I've asked them to get this lightweight aircraft aluminium collars to be installed together. 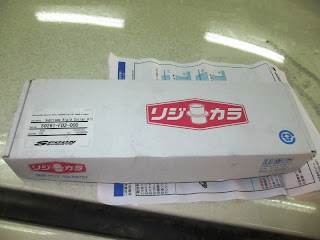 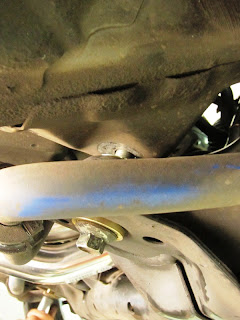 1. The installation took only around 30-40 mins without any issues removing the bolts etc.

2. I feel the car being fairly stiffer than before with these collars on! Although stiff, driving feels much firmer and precise especially when taking the corners. I'm also happy with the fact that the front of the car is not 'jumping' whenever I hit the uneven pavements. However, some of the FD2R owners didn't feel much difference after installing this probably due to their higher rigid chassis haha..

3. Have a look at the video below on how this little thing works (you can search for english version of the video though)

1. http://www.rigidcollar.info/ (They now have their own "Rigid Cola" division to cater for other makes too! Good business for Spoon!Also take note that the rigid collars for the rear subframe is already on sale for the DC5. Do want!).
Posted by me or you at 10:38 PM 2 comments:

As I have briefed in my earlier post, the custom TedcoSport header has been ready for installation for sometime. Appointment was finally set and Mamba was sent to the good hands of TedcoSport technicians for the header replacement.

I'll let the pics do the talking (coz I'm terribly tired now). Will edit this and that tomorrow hopefully. So here you go..